5 Important Metrics to Monitor in Your Sports Simulation 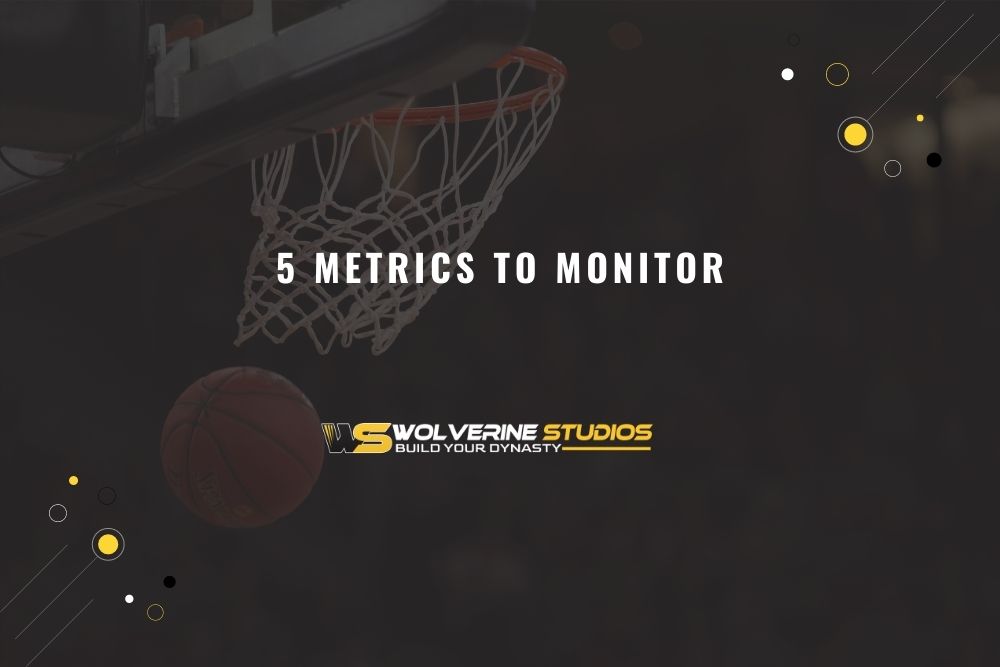 To succeed in leading your franchise and building your dynasty, you need to learn from experience and understand the tools that are available to you on your sports simulation platform. Metrics and analytics play a critical part in the Wolverine Studios experience. Aside from archived highlights and historical data, we provide you with a plethora of detailed statistics.

While these numbers might not specifically tell you where you went wrong or how you can outsmart the next opponent, they can reveal vital insights into your team’s performance. You can identify trends and key areas for improvement, but you’ll need to spend time and exert brainpower to glean them from the data.

In this blog, we’ll focus on DDS: Pro Basketball 2021 specifically and the metrics you need to track to succeed in this game.

5 Metrics You Need to Track in Your Sports Simulation

This metric determines the team’s efficiency in terms of maximizing each possession and minimizing opportunities for the other team to score. The offensive rating doesn’t just pertain to the number of points the team scored. It also accounts for how efficiently the team earned those points. Similarly, the defensive rating doesn’t just mean blocking the ball. It also factors in the players’ defensive stop - how they can end the opponents’ possession and keep the ball out of their hands.

You don’t necessarily have to rank high in both as they can balance out. You can compensate for a low defensive rank by being more aggressive and efficient offense-wise, and vice versa.

Also, these ratings can reveal points for improvement on a micro-level. For example, if your offensive rating is low, there are a number of areas you can check. Perhaps your team is not very good at getting to the free throw line or you may want to check the field goal and free throw percentage of your players to find out who is shooting at very inefficient levels. A statistic like offensive rating is useful in pointing you in the direction of where a problem could be at.

This metric is factored into a team’s offensive rating. While 3-Point Attempts note the number of 3-point shots taken throughout the game, 3-Point Percentage accounts for the successful attempts. Beyond shooting prowess, this is an indicator of scoring efficiency. The more 3-point shots you convert, the more efficient your team is at scoring. You maximize a possession more by scoring higher per attempt.

So, if you notice that a player or the team makes a significant number of attempts but reaps a low percentage, then this highlights that you need to improve on converting those shots.

Field Goal Percentage and Attempts function on the same principle but account for all shots taken excluding a free throw. Why is 3-point shooting the more important metric? Simple. The 3-point shot is crucial in today’s game. Teams averaged nearly 35 3-point attempts per game this season. Ten years ago, that number was half as many. Teams have realized that the 3-point shot is far more valuable than mid-range 2-point shots and have changed their offensive strategies accordingly.

Rebounding is all about getting the ball back, so these metrics track how many times you recover the ball after a missed attempt. A rebound is categorized as offensive or defensive depending on the stance being played by the team in that possession.

It’s important to analyze these as basketball is all about who scores the most, which you can’t do if the ball isn’t in your hands. Rebounds push for possessions and keep the ball in play within a possession. Successful offensive rebounds entail that players can earn the team more chances at the basket. On the other hand, successful defensive rebounds indicate that the team was able to keep the opponent from scoring.

An assist is defined as a pass that directly leads to a basket. This metric reveals how well your team is able to find open players and move the ball around the court. It’s a great metric to analyze when building teamwork and team chemistry. At the end of the day, only a handful of players will be able to successfully convert basket attempts. But assists will reveal how much the other team members have contributed to the points, even if they didn’t post high numbers on the scoreboard.

This metric is often referred to as a catch-all stat to determine players’ professional rankings, but it comes with some caveats. PER factors in all of a player’s contributions – both positive and negative – in a game to gauge efficiency per minute. It considers variables like playing time and pace, so it’s a fairer and more proportional way to compare the efficiency of players.

Take note though that this metric favors offensive stats. So, for your more defensive players, you may want to draw insights from individual defensive-specific stats.

This list of metrics certainly isn’t exhaustive and fully representative of everything that Wolverine Studios will track for you. After all, we have designed a sophisticated and intelligent platform that mimics real-life conditions and variables so you can enjoy a lifelike coaching or managing experience. But this gives you a look at how you can maximize the metrics that fuel your success.

We understand that these stats are not just there to appear savvy but are meant for you to use strategically to improve your franchise’s performance. So, we make it easy and efficient for you to access and view this information. These are available on the platform, but you can also export databases for you to tinker with according to your preference.

Ready to get started? Try a free demo today!