5 of the Best NFL Plays We’ve Ever Seen 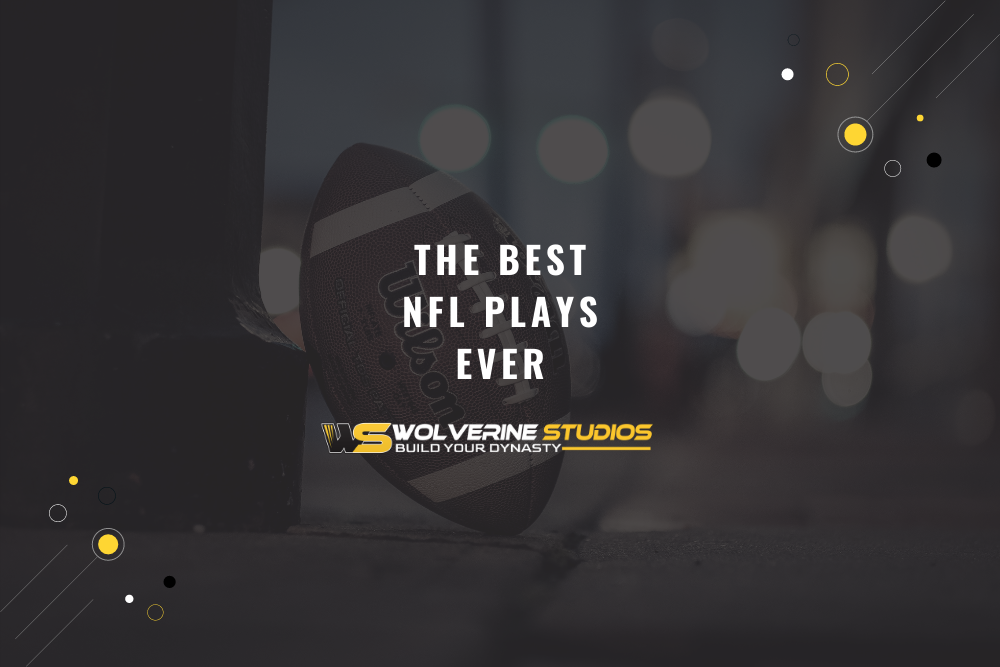 The adage “practice makes perfect” rings especially true in sports. Many unpredictable and uncontrollable factors occur during game day. But practice and teamwork help embed plays and strategies into the team’s DNA so that even under enormous pressure, players can think on their feet, adjust to fast-changing circumstances, and find solutions in a snap.

Many of the greatest plays in NFL history are not due to perfectly executed plans. Rather, they are born from coaches and teammates giving players a shot, even when the odds are against them. They are made in moments when underdogs step up when their teams needed them the most. They are magicked in times of desperation, crafted with skill and hope.

These are five of the best NFL plays we’ve ever seen.

5 of the Most Memorable NFL Plays of All Time

On December 23, 1972, a miraculous and once-in-a-lifetime catch was achieved. The Oakland Raiders and Pittsburgh Steelers faced off in the AFC Divisional Playoff Game held at the Three Rivers Stadium. 22 seconds were remaining on the clock, and the Steelers had fourth and 10 at their own 40.

A stunning succession of events led to what is known today as the “Immaculate Reception.” Terry Bradshaw escaped a pass rush and threw a pass to John “Frenchy” Fuqua. But Fuqua took a massive hit from Jack Tatum, Raiders’ safety. It sent the ball flying and into the hands of Harris who caught it mid-air and took it straight to the end zone.

That game was the Steelers’ first playoff victory, and though they did not make it to the Super Bowl in ’72, many believe this play was square one of their dynasty in the 70s. The term “Immaculate Reception” was coined by Myron Cope, a Pittsburgh sportscaster. Even decades later, the play is considered controversial due to some unclear factors. Some believe that the ball touched the ground, while others believe that the ball only touched Fuqua during the collision, which would also have been unacceptable as the rules stated that the ball must not be touched by offensive players consecutively.

But at the time, referee Fred Swearingen consulted with Art McNally, the NFL supervisor of officials, and ruled it as a touchdown.

The play was initially called “Home Run Throwback,” but as of January 8, 2000, it has since been referred to as the “Music City Miracle.” It was a nail-biter AFC Wild Card game between the Titans and Bills. The Bills were leading 16-15 thanks to their kicker Steve Christie’s 41-yard field goal. 16 seconds were remaining. But on the following kickoff, Christie pooched it, and the ball landed in the hands of Lorenzo Neal, the Titans’ fullback.

He immediately handed the pigskin over to Frank Wycheck, their tight end, who raced the ball down the right side of the field. As coverage lands broke, Kevin Dyson, the Titans’ wide receiver, became available. Wycheck heaved a pass to him, and Dyson raced it down 75 yards untouched to secure a touchdown and a victory.

There was some controversy around whether it was a lateral or a forward pass from Wycheck to Dyson, but referee Phil Luckett confirmed that it was a successful touchdown upon reviewing the play. The Titans went on to beat the Colts in the divisional, and the Jaguars in the AFC Championship Game.

Unfortunately, Dyson came up one yard short in the Super Bowl where the Titans lost to the Rams.

The coined term now pertains to any pass that just gets thrown with very little chance of conversion; you toss it out there out of desperation and cross your fingers someone from your team can catch it.

That’s exactly what happened on December 28, 1975. It was a Divisional Playoff game between the Cowboys and the Vikings, with the former trailing 10-14 with only 24 seconds left on the clock. Roger Staubach fired a desperate shot to Pearson deep down the right sideline. “I just threw the ball as far as I could and said a Hail Mary,” he said.

Well, it must have worked! By some divine intervention, Pearson caught the fifty-five yard bomb at the 5, locked the ball to his hip, and made his way into the end zone. Another controversial play, there were different POVs on the factors surrounding the play. Some suggest that Pearson pushed off cornerback Nate Wright (which Pearson resents and denies), but no offensive pass interference was called.

The debated no-call made Pearson so unpopular that he made use of fake names on future air travels to Minnesota.

It was January 10, 1982, during the NFC Championship Game between the 49ers and the Cowboys. The 49ers had not yet made a Super Bowl appearance, much less won it. But it would change that year, thanks to a legendary touchdown that secured the 49ers' win at 28-27.

With 4:54 left to play, the 49ers were on their 11-yard line. The play had intended for the ball to go to Freddie Solomon, the 49ers’ receiver, but he slipped, and the Cowboys’ pass rush was on Montana. Montana retreated and there appeared to be only two options: Either he was going to get taken down, or the ball was going to be thrown out of bounds.

Montana threw a high pass, and like destiny, Dwight Clark cut across the back of the end zone to achieve the unbelievable catch. Clark was never known for his leaping ability, which makes this feat even more impressive. The touchdown tied the score, and Ray Wersching made an extra point that became the game-winning strike.

But that’s overlooked in history, in the shadow of “The Catch.” The 49ers went on to win their first Super Bowl where they triumphed over the Bengals.

This is a classic, buoying tale of a player showing up for the team when they were needed the most. According to former Giants Head Coach Tom Coughlin, the Friday before Super Bowl XLVII, wide receiver David Tyree kept fumbling the ball and had trouble catching anything.

QB Eli Manning would put his arm on Tyree’s shoulder and offer encouragement: “Don’t worry, David. When we need you, you’ll be there.” Those words came to fruition on game day, with 1:15 left to play. The Giants had a 3rd and five from their 44, and the Patriots were leading 14-10. Giants QB Manning had his hands on the ball but was in a bind with Adalius Thomas, Richard Seymour, and Jarvis Green.

With enough squirming around, he managed to break free. The QB caught sight of Tyree deep in the field and gave him a shot. A ball flew high down the middle and Tyree launched in the air with arms up to catch it. Patriots’ safety Rodney Harrison came at Tyree and swiped at the ball, but Tyree wedged it securely against his helmet and maintained control until they hit the ground at New England’s 35. This play helped keep the Giants’ hope alive and four plays later, Manning connected with Burress to finish a 13-yard touchdown that secured their 17-14 win and ended the Patriots’ campaign for a perfect season.

The game is considered the second greatest upset in the history of the Super Bowl.

Your own great play and victorious moment may be waiting just around the corner. Try our free demo today and build your dynasty with Wolverine Studios.