Being A Sports General Manager: Expectations vs. Reality 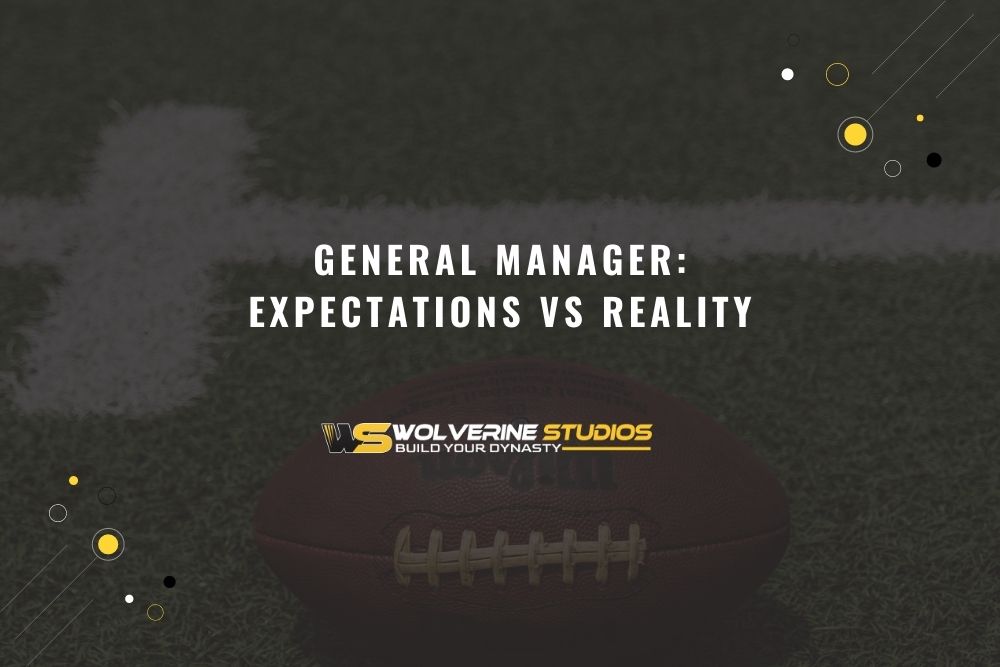 The role of a general manager on a sports team is a prestigious and high-paying job in real life, but it’s also one of the toughest jobs in the industry, as indicated by its high turnover rate. With the rise of revenue and demand in the last 40 years, the responsibilities that come with being a GM have evolved. The complexity and stress of the job certainly match the paycheck.

Most of the work happens before and after the game, off-camera, and behind the scenes. It used to be a backroom job that was handled with moderate obscurity. But with the growth and evolution of how sports fans follow the team and consume content, general managers are thrust into the spotlight. Now, avid fans are knowledgeable about the game and track statistics, and they understand the ripple effects of an off-season decision to the team, making each decision all the more important.

Walk a mile or two in the shoes of a general manager and build your dynasty with Wolverine Studios. But before you dive in, let’s debunk some GM myths to get you started on the right foot.

What it’s Really Like to Be a General Manager

Expectation: Your focus is on building the team.

Reality: Your job is to build a franchise.

The sports team is the integral core product of any sports franchise, so it’s a given that the bulk of the general manager’s job involves the management of the players. But that’s only one side of the coin. A sports franchise is, in essence, a company with many departments and moving parts. The general manager functions as the CEO who oversees all of the company’s operations, manages the finances, and ensures the return of revenue for the shareholders.

The team is only one department in that company, with the head coach functioning as the department head. You may even consider them as the main product, endorser, and overall face of the company. But you, as the general manager, need to pay equal attention to your accounting department, marketing department, logistics departments, and all other cogs that help the company run like a well-oiled machine.

Just as the athletes and coaches are provided ample resources to improve their skills, you must also encourage and foster the professional development of other departments.

Expectation: To be a good GM, you just need to love and know the game.

Some former athletes go on to become general managers. An in-depth understanding of the game is crucial to becoming a good general manager because you work alongside scouts and coaching staff to round out your roster. But knowledge of the game can only take you so far.

To be an effective general manager requires an extensive arsenal of skills and knowledge, including business acumen, accounting skills, communication and negotiation skills, and basic legal know-how. As the general manager, you are responsible for negotiating contracts and salaries and striking deals with other teams to trade players.

You are in charge of managing the franchise’s finances, which includes spearheading revenue generation and the handling of expenses such as salary caps, facilities, uniforms, training, rehabilitation, and travel. To top it off, you must know how to effectively manage a wide range of moods and personalities.

Reality: You answer to the franchise’s stakeholders.

As the general manager, you may feel like the top dog because you are the executive decision-maker in the franchise. You oversee the entire operation and everyone in the franchise answers to you. So, yes, officially, you’re the boss. But you also have bosses of your own.

While you’re the “CEO” of the company, you answer to the various stakeholders of the franchise. These include the owners whose money you spend, the fans who are invested in the team, and the other teams in the league with whom you interact behind the scenes. To be a successful general manager, you have to establish sustainable avenues for profit for the team, and this is centered around building a winning franchise.

As the boss, you also answer to the team, coaching staff, and all employees of the franchise. You’re an integral part of the support side of the franchise. Your task is to ensure that all operations run smoothly to feed into a successful game day. Much of the work happens off the field so that your players and coaches can focus on winning.

It’s a challenging and rewarding job, and a lot more goes into being a successful general manager than most of us realize. But a qualified GM can help to build a franchise that’ll go down in history. It’s an opportunity to leave a real mark on the history of a franchise, and play a role in how the team performs.

Wolverine Studios lets you get a taste of what it means to be a sports general manager. Powerfully built with a sophisticated AI, we’ve designed the system to mimic many real-life challenges and variables that GMs face. For example, we’ve moved beyond superficial customization and equipped each player with unique strengths, weaknesses, and personality traits. This level of attention to detail allows you to develop the skills needed to manage people from different backgrounds and contrasting personalities.

Ready to build your dynasty and become a general manager? Try a free demo today.

Don’t forget to read our blog on what it’s really like to be a coach.