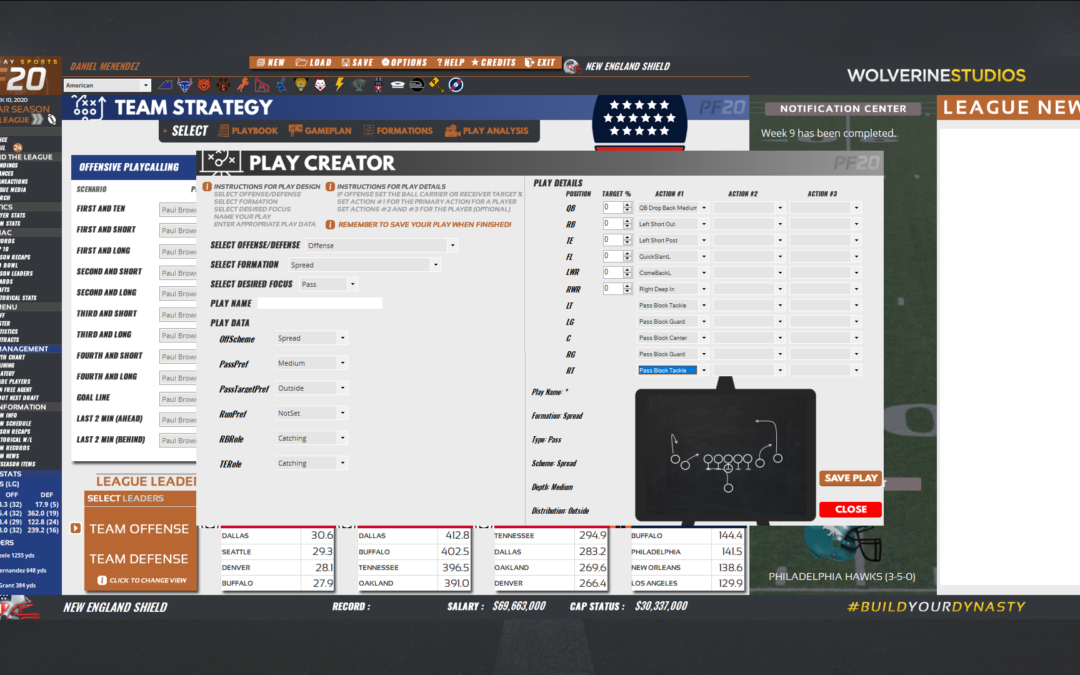 Well fans we've had a lot going on recently but #FeatureFriday is back and in a big way as we take a look at one of the biggest new features coming to Draft Day Sports: Pro Football 2020 this year....the custom play creator!

To say this feature is a game-changer would be an understatement. The custom play creator gives you the utmost in control. You already can set a very detailed and extensive gameplan in DDS:PF 2020 but this is a whole new level of control! It's a coach's dream - your football acumen against the AI's (or in multiplayer leagues another human's). Can you build the better play? Can you build the ultimate playbook? Just how well do you know football?

Now before we dive in let me preface this by saying this is an optional feature - if you're a player who just enjoys the GM side of things and doesn't revel in the details you can turn this feature off and multiplayer leagues can do so as well if they wish to do so but we sure think it's going to up the challenge level if you're creating plays and playbooks to beat your buddies! Best of all you can even share your playbooks and import them into the game so if you're in a generous mood feel free to share your creations with the community!

As you can see there is alot of detail and options on this screen but hey, football is a complex game. You can create plays on either side of the ball but for this post we're going to look at the offensive side. Start with choosing a formation - I'm going with the Spread formation here because I want to air it out! I'm choosing a pass play and you can see there are a number of options available each which can change based on the formation you are using. You get to choose your preferred range on the pass as well as the area you want to target. You also get to set what roles you want the RB and TE to play - in my case I want everyone going out for a pass. The more options the better, right?

Now here's where the real fun begins. As you begin to set actions for each player you will see their routes or duties appear on the chalkboard at the bottom. The WRs in this setup have nearly 40 actions themselves they can perform! The number of different plays you can create is immense because there are so many choices. You can even set multiple actions. Maybe I changed my mind and wanted my RB to block at first and then release for a pass. You can do that!

When you've got a beautiful play finished don't forget to give it a name and save it and then add it to your playbook. After that get out there on the gridiron and watch it unfold in our physics based 2D gameplay engine. Can you imagine the feeling you will get when its 4th and goal and you need a touchdown and you pull out the special play you designed just for that situation? You see that TE break off on his quick slant, watch the QB fire the ball to him and see him haul it in and listen to the crowd roar as you see TOUCHDOWN on the screen! Just don't hurt yourself with all the pats on the back you will be giving yourself for being the next Vince Lombardi.

There's no other football game out there that can give you this level of detail and control and really make you feel like the decisions you are making are impacting your team's chance to win or lose. We can't wait for you to get your hands on the play creator and see what kind of plays you come up with. Make sure you hit us up on Twitter, Instagram and Facebook when you want to brag about how your play won the game for you and don't forget to comment below with your thoughts about the new play creator!