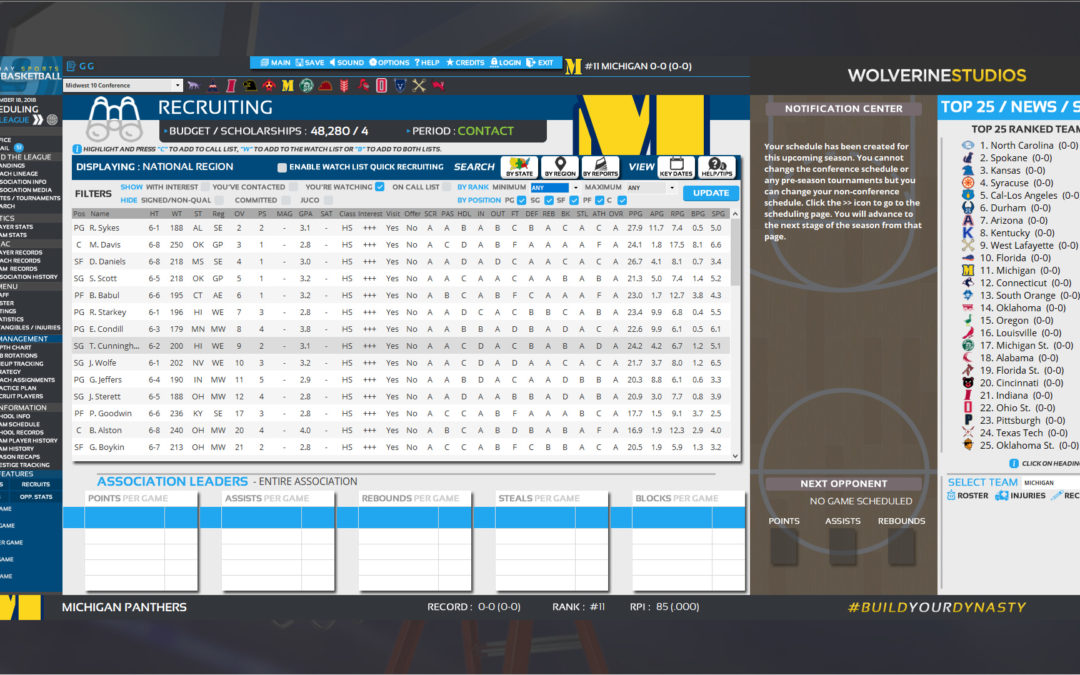 With the first full day of March Madness in the books what better topic to cover today then the biggest step in getting to the big dance? If you want to be dancing in DDS: College Basketball in March you need to build yourself a program and the key to doing that is being successful at recruiting.

Just like in real life recruiting is complex and takes some work and we want to provide an authentic experience - in fact so authentic that you have the ability to offer bribes to recruits when calling them with of course running the risk of getting caught and facing the consequences (you can always turn the bribe players option off if you prefer a squeaky clean version). Now if as a gamer complex and work aren't your thing don't worry - this article might not be for you but the game has you covered. You can always turn over recruiting duties to the AI completely or new in the 2019 version of the game you can have the AI take over for the summer portion with the click of a button and resume any duties later on. But for those who want full control in building their collegiate dynasty we're going to share some helpful tips to make the most of your recruiting efforts.

Each summer you start off planning for the year purchasing your scouting reports and planning your summer travel. If you're playing as a big program and have a large budget you can feel free to be a bigger spender in these areas but its also necessary. If you are a powerhouse program you'll have players all over the country who will want to play for your school so the additional information you can gather will make it easier to find your initial targets. With a smaller school you'll have less budget to spend but also are not likely to be scouting outside of your region or maybe even your state. One thing about the budget is that its always good to go through your first season a little cautiously to see just how much you're spending on recruiting and your coaching staff. Once you get an idea of what you spend in those areas you'll know for the future how many extra reports or camps you can purchase. It does help you to spend as much of your budget as you can - if you're not using up the budget the board of directors isn't likely to approve a request for a budget increase later on.

On the recruiting screen the first thing you'll want to check out is the key dates button. You'll see the year is broken up into multiple sections with different things you can do during different periods. Notice that there are only three short periods during the year you can visit a recruit's home - these periods, especially the one in the late fall, are crucial because this is when you "seal the deal". Not only is that realistic to the real world it also makes sense - a coach can't go off visiting kids across the country and be at home for practice or games after all. Let's take a look at this recruit below.

We can learn a whole lot from this look at the recruit. All summer long we have had him on our call list and have been using the call player option - that's how we obtain our recruit notes and learn things about the pitch categories. As you can see in the image on 8/14 the recruit mentioned that he's all about playing time. We have also been using the game film option and between that and watching him perform at summer camp the coaching staff has been able to apply ratings to the recruit. Between those ratings and the WSSN ranking we can tell Starkey would be a nice recruit for us to have and he's got a 2.8 GPA so we're pretty sure he'll score well enough on his SAT to be eligible for our school's requirement (although he probably won't score high enough for the elite academic schools). Now that we've spent all summer calling, watching, scouting and even hosting him on campus for a visit it's time for the moment of truth - we schedule the home visit and we're going to pitch playing time to him. After all he's said that it is the most important factor and I'm pretty sure we can find the minutes for a guy who looks this good.

Recruiting is all about finding players that fit your program - any coach will tell you that. If you're a team that wants to press you better be looking for players who grade out high in athleticism and defense. If you're going to be a team that launches threes all day then you're going to want to focus your search on players who are good outside shooters. There's no right way to build a program and you can have success with a number of different paths. The key is to use the tools you have available to identify players that fit your program and its needs. He might be a five star player looking to be a one and done at a major or a JUCO transfer looking for a home at mid-major program - the recruits themselves are as numerous as the ways to recruit them. It's up to you to get out there on the recruiting trail and try - after all your in game coach will acquire experience in his recruiting ability just like in real life...through repetition and trial and error. Try starting out at a small school - you'll have a smaller pool of recruits to focus on and go after and as you become a better recruiter and establish yourself in states (the game does have a pipeline feature) you'll be ready to move up to the big time and will be dominating the recruiting trail. There's nothing like the feeling of seeing that email in your inbox telling you that the recruit you have been after for months is going to be on the floor for you next season!