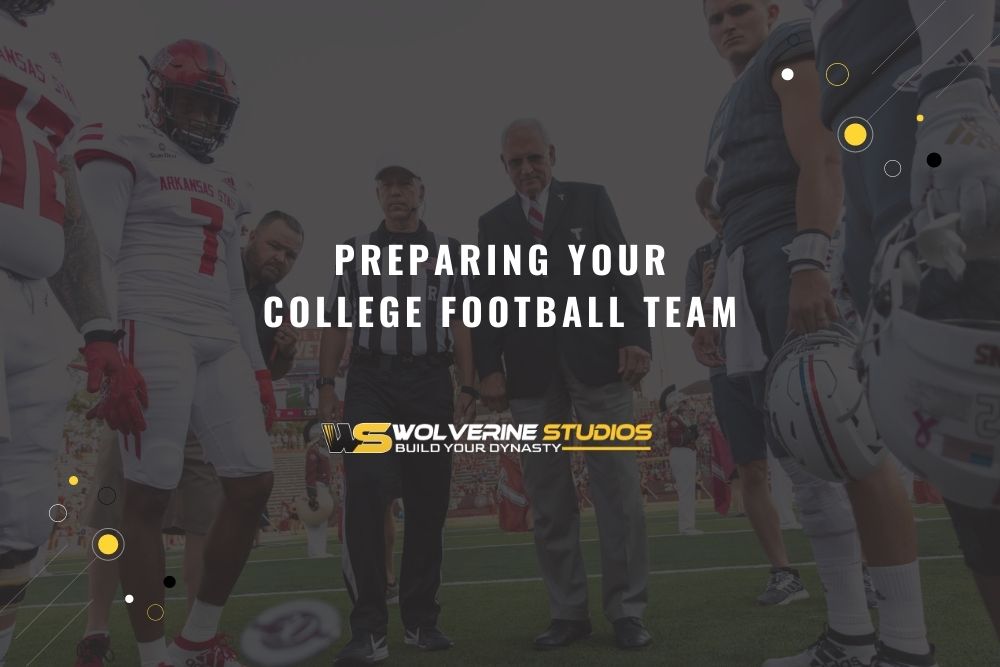 Football season is one of the most exciting and anticipated experiences in collegiate life. For students and alumni who are fans of the sport, it’s an opportunity to engage with the community and show school pride, even if their understanding of the game is limited. For avid football fans and knowledgeable students or alumni, it’s a unique combination of their interests.

It’s commonplace in college football games to see fans bellowing from the stands, either at the opposing team or (more often than not) the coaching staff of their own team. If you find yourself doing the latter a lot, then Wolverine Studios has everything you’ll need to test out your knowledge, develop real skills, and live out your dreams of becoming a successful college football coach.

But before you start your college football season, here are some tips to ensure you get your team on the right track towards victory.

4 Steps for Preparing for Football Season

1. Mix and Match Your Lineup

The principles and core competencies required in a specific position are relatively the same, no matter the player. For example, every great running back is required to be elusive and proficient at catching passes and gaining yards. But if you have two or more running backs on the team, they may differ in terms of physical build or maximum running speed. Players can differ in terms of physical characteristics or skills that can impact the playing chemistry.

Before the season starts, test out different lineups to see which players mesh well and complement each other’s strengths and weaknesses. Building multiple efficient lineups is crucial to creating a successful and sustainable team. This ensures that your game results are not pegged on the shoulders of a handful of star players.

At Wolverine Studios, we take pride in our highly sophisticated and always-learning AI and attention to detail. We deliver a true-to-life experience that goes beyond superficial customization and two-dimensional game characters. In-game players are designed with unique characteristics, quirks, personality traits, and backgrounds – just like a real person. These factors may have nothing to do with a player’s athletic abilities, but they can affect how a player interacts with their teammates.

2. Build Plays for the Team, Not the Other Way Around

Don’t get fixated on developing plays that are inventive trick plays or surprising plays that your opponents won’t see coming. Force-fitting your team to a specific play may work against you as you might end up underutilizing certain players or untapped skill sets. It might also result in the core players getting overworked if too many plays are designed around them.

Instead, flip the script and focus on crafting plays that build off your players’ strengths and unique team chemistry. Wolverine Studios’ Draft Day Sports: College Football lets you create your own playbooks and plays that maximize your team’s specific skills. The platform comes with a plethora of customizable features that you can tweak to design your plays such as Formation, Run/Pass Focus, Passing Preference, Passing Target, and Play Action.

You can choose the specific role of the running back and tight end. You can also select actions for all players such as “Slam Right,” “Run In,” “Pull Left,” and “Run Block Center.” These in-depth customization options allow you to create unique weapons against your opponents and control your team’s destiny on the field.

“Failing to plan is planning to fail,” said Benjamin Franklin. This strategy applies to almost every task that entails working towards a goal, including sports. Give your team the best possible chance at success by carefully planning for the season. Review game highlights and statistics from last season to understand your team’s strengths and areas for improvement.

Aside from crafting strategies that play into your players’ skills, you must prepare for your opponents. Try to anticipate their plays based on their performance last year and whether they have any notable recruits or coaching staff changes.

Wolverine Studios tracks and archives just about everything – from key performance insights to game highlights – so you can evaluate what worked and what didn’t last season. Our career-based simulation gives you visibility on statistics like offensive and defensive ranks, top offensive and defensive players, and conference ranks. You also have access to league media, league standings, league leaders, Almanac, and other resources that you can mine for crucial information. With all of these tools and resources, you have everything you need to build your dynasty year after year.

Aside from the playing aspect, you must also prepare for the administrative side. (Remember, the people filling these roles are part of the team, too!) Make sure your team has the right equipment for training, as well as uniforms to wear during practice and game days. Wolverine Studios lets you customize almost everything, from logos to jerseys, so your team’s wellbeing is in your hands.

Preparation is key, and without it, you’re asking for trouble. The big game starts long before you step out onto the field. The early bird gets the work, so start your planning well in advance.

Do you think you have what it takes to be a legendary college football coach? Let’s see what you’ve got. Test your skills with Wolverine Studios, build your franchise, and lead your team to victory. Try our free demo today and see what all the hype is about.