The Best Traditions in College Football 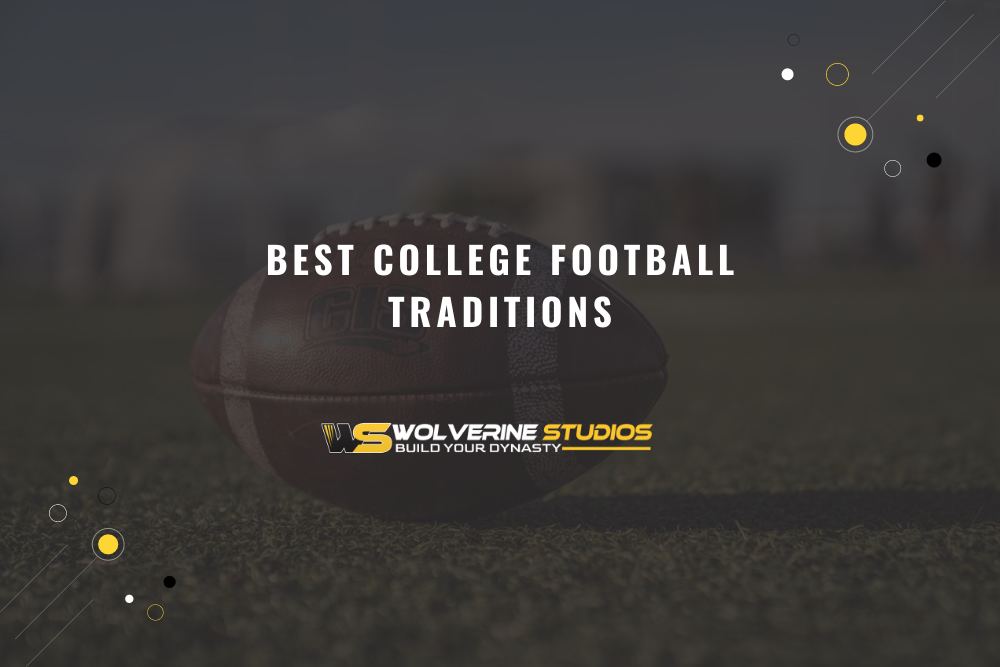 Football is embedded in American culture, so much so that practically every school has its unique traditions related to the team and sport. Even for those who are not fans of the game, experiencing the roar of the crowd and the school pride is enough of a reason to come and cheer their lungs out. But while every school has its way of showing school spirit, intimidating the opponent, or celebrating their wins, some traditions are iconic and timeless.

Here are 10 of the best college football traditions.

10 College Football Traditions We Look Forward to Every Year

Without a doubt, tailgating is one of the best college football traditions, regardless of what school you come from or support. Tailgate parties start long before the start of the game as fans and supporters come together to eat, drink, hang out, and revel in the feeling of game day.

Because everyone who turns up shares a common love for the game and team, there’s a pre-existing feeling of unity and familiarity. Everyone is welcome, and every school has its own tailgating traditions.

Although this game is typically held as the last regular-season game, it holds a special place in the hearts of college football fans. The annual matchup between the Midshipmen and Black Knights dates back to 1890. Before the actual game, large sections of cadets and midshipmen enter the stadium. They march into formation, then head into the stands to watch the game.

Even if neither school is your alma mater, it undoubtedly strikes a sense of patriotism as spectators watch with the knowledge that each player is destined to serve the country in the military.

Since 1936, dotting the “i” has been a tradition for the Ohio State Buckeyes. The school’s 225-piece Price of Buckeyes, which is recognized as one of the best college marching bands, spells out “Ohio” in script lettering, but the highlight is the tiny dot – a single person separated from the rest of the band – that finishes off the letter “i.” To “dot the i” is an honor that is typically given to a 4th-year sousaphone player. They are tasked to march for 12 yards to reach their position, bow to the away side, do an about-face to the home side, then take a big bow to the roar of the crowd. Occasionally, the role is given to an honorary participant.

Native American history has always been at the heart of the Florida State Seminoles, with their official mascot being Chief Osceola, named after the Seminole Indian leader. The idea was formed around the 1960s but only signed off by coach Bobby Bowden in 1978.

Since then, every home game by FSU is kicked off by Chief Osceola riding in on his horse, Renegade, and throwing a spear into the turf. It’s a phenomenal homage to history and an absolute crowd-pleaser.

While this tradition from the Miami Hurricanes is relatively new compared to other generations-old football traditions, it has certainly made waves. The Turnover Chain, the brainchild of Manny Diaz, started in 2017. The first chain was a luxurious 10-karat gold Cuban link chain with a bedazzled “U” emblem and weighed 5.5 pounds. The chain is awarded to the team’s defensive players for forcing turnovers, which can play a crucial role in making or breaking a game.

The chain has proven itself as an effective incentive and crowd favorite as during its first year in 2017, the school forced 31 turnovers, ranking 3rd in that category nationwide.

The University of Colorado has a unique mascot – a live female buffalo named Ralphie. Ralphie and her team of handlers, a team of varsity-level athletes called Ralphie Handlers, lead the school’s football team onto the field before the game. They usually run a horseshoe pattern or U-shape across the field, running at great speeds of up to 25 miles per hour. It’s a time-honored tradition with Ralphie considered as a symbol of Buff pride. Since 1966, the school has had five Ralphies.

A tradition that is newer and simpler than most but heart-tugging in its earnestness, the Kinnick Wave began in 2017, the season after the completion of the Stead Family Children’s Hospital. The top floor of the hospital includes a “Press Box” that offers a perfect view of the Kinnick Stadium so that patients and families can watch the Hawkeyes’ home games together.

At the end of the 1st quarter, Iowa fans turn to wave at the children watching from the windows of the hospital. The children often stick posters and signs on the windows to show their support of the team. The Kinnick Wave is a beautiful show of solidarity among all Hawkeyes.

8. University of Wisconsin – Jump Around

Between the last two quarters of the game, the Wisconsin Badgers own the stadium to the beat of House of Pain’s Jump Around. As the end of the game nears, the energy is electrifying as the sea of cardinal red and white bounces around to the tune.

The tradition was unofficially started with the school’s swim team in 1992 but has now become a famous football tradition. When a crowd of thousands all jump and bop in unison, it can feel like an overwhelming shakedown.

Unlike most schools, Auburn University’s football tradition happens after the game and outside of the stadium. After a big win, head over to the intersection of Magnolia Avenue and College Street and keep a lookout for flying toilet paper rolls. Auburn supporters throw toilet paper onto the oak trees on Toomer’s Corner to celebrate their victory. It’s such an important tradition that in 2010, an upset Alabama fan poisoned the trees in retaliation for their defeat. The original trees were removed in April 2013, but new ones were planted in February 2015 and the tradition lives on.

Virginia Tech sure knows how to get the ground shaking for their Hokies. The team exits their tunnel to Enter Sandman, a Metallica song that fans have memorized by heart. The song gets both the crowd and the team pumped up for the game, and the earth-shaking effect of collective rocking out is a nerve-wrecker for opposing teams.

Want to get in on the action and build your own college football traditions? Check out Wolverine Studios’ free demo and try Draft Day Sports: College Football 2021 for yourself.