The Top 5 Biggest Upsets in Pro Football in the 2000s 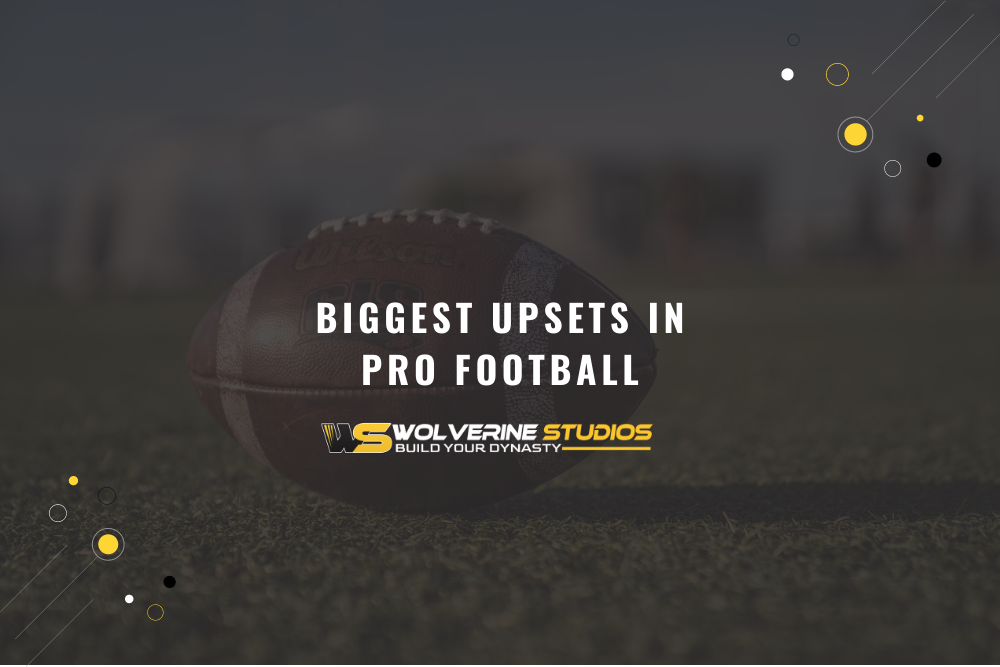 One of the best things about sports is that truly anything can happen. Once that clock starts to tick and bodies move, it’s anyone’s game. Pro football has seen many underdog stories — of rookie QBs matched against experienced QBs, of champion teams matched against winless teams — which have made for jaw-dropping, history-making moments.

There are, undoubtedly, countless upsets in football history but in this blog, we’ll take a look at the top five biggest pro football upsets in the 2000s.

Psst! Are you ready to take the field and build your own football dynasty? Right this way.

5 of the Biggest Upsets in Pro Football Throughout the 2000s

Before the Patriots became one of the NFL’s most powerful teams, before Tom Brady was one of the most prominent figures in professional football, they were the Cinderella team of the season and an underdog in a classic David-versus-Goliath matchup in Super Bowl 2002.

In 2002, the New England Patriots season was off to a rocky start. At the time, Bill Belichick had a losing record as an NFL head coach. Making matters worse, the Patriots’ experienced QB, Drew Bledsoe, suffered significant injuries in a game against the New York Jets. He was subbed by then-24-year-old Tom Brady. On the other hand, the St. Louis Rams had true dynasty potential, with a recent win in Super Bowl 2000 and an offensive line loaded with future Hall of Famers.

Many of the stats of that Super Bowl game made it seem like the Rams had the game on lock — they achieved more first downs, more total yards, and had a greater time of possession. But these didn’t convert to points. It was a close game with a true movie finish — at one minute and 30 seconds, both teams were tied at 17 with no timeouts. Many expected the game to run into overtime, but Brady and the Patriots spun magic. Brady completed five passes on the drive that inched the ball closer into the Rams’ territory.

With seven seconds left, Brady spiked the ball and stopped the clock. The Patriots’ Vinatieri kicked the ball from 48 yards with perfection, and the Patriots’ dynasty was born. The game finshed with a 20-17 Patriots victory. It’s worth noting that 17 of the Patriots’ points were made from the Rams’ turnovers, further emphasizing how these can make or break a game.

Another underdog story for the books, this game was not only a remarkable feat for the Giants, but also the backdrop of one of the most historic moments in football history. In 2008, the Patriots had a perfect 16-0 season, the first since the 16-game season was established in 1978. Understandably, there were high expectations for the Patriots to win, as they were the top-seeded team in the league versus the then-fifth seeded New York Giants.

It was a close game throughout until things slowly soured for the Patriots with a scoreless 3rd quarter. Then, in the 4th quarter, the famous “Helmet Catch” happened.

In the practices before the big game, Giants’ wide receiver, David Tyree, struggled to catch anything. But QB Eli Manning gave him unconditional support.

When Manning managed to wriggle free of three Patriots, he heaved the ball deep down the field. In a miraculous moment, David Tyree jumped up like a basketball player to meet it with open arms. He trapped the ball between his hand and his helmet to keep it safe as he crashed to the ground.

The game still had four plays to go, secured by Manning and Burress in the end zone. But it was this stunning catch that is dubbed one of the greatest plays in football history and defined this Super Bowl upset. The Giants won 17 to 14.

Before the Wild Card game, the New Orleans Saints (then-defending Super Bowl Champs) flew into Seattle with a 7-2 winning record and one of the best victory margin averages in the league, while the Seattle Seahawks had a losing record that season.

The Saints led early in the game, knocking the Seahawks down at 10-0 and 17-7. But then, the Seahawks went on a run between the 2nd and 3rd quarter, eventually taking the lead in the 4th quarter at 34-20. The Saints leaned into the strength of their passing game, cutting the lead down to 34-30. Hope was still in sight for the Saints with 5:36 on the clock. But on the Saints’ 6-yard line facing the Seahawks’ defense and the 12th man, the nickname given to Seattle’s fans, Seattle showed up with a 3 and out stop to get the ball back with 4:20 remaining.

The Green Bay Packers were league favorites in 2011. They had a 15-1 run in the regular season, and the second highest-scoring offense in the league’s history. Many predicted that history was on the side of the Packers, the 9-point top playoff seed. After all, they had already faced off, and won, against the New York Giants in the regular season at 38-35.

The game was eventful from the beginning, with both teams scoring on their first two drives. But with a series of smart plays, particularly a 23-yard run from Ahmad Bradshaw and Manning’s successful Hail Mary pass to Nicks at the end zone, the Giants led the game 20-10 by the end of the first half.

Come the second half, Packers QB Aaron Rodgers was able to orchestrate plays that pulled them back into the running, including a 16-yard touchdown by wide receiver Donald Driver. But the Giants recovered and the final blow was delivered through a 14-yard touchdown by running back Brandon Jacobs.

The game concluded with the Giants on top, 37-20. The Giants went on to win the Super Bowl three weeks later, a title that was once thought to be destined for the Packers.

The Buffalo Bills, led by then-rookie QB Josh Allen, pulled off one of NFL’s greatest upsets since 1995 when the Redskins pulled one over the Cowboys. The Bills were the highly underestimated 16.5-point underdogs of the matchup

The upset was a combination of things going badly for the Vikings and going extremely well for the Bills. In the first quarter, the Bills got 10 points stemming from 2 strip-sacks against Minnesota’s QB, Kirk Cousins. The Bills successfully held off the Vikings, keeping them at bay at 4.5 yards per play, 2.3 yards per rush, and QB Cousins at 5.4 yards per attempt.

It didn’t help that the Vikings defensive line was having a bad day while Bills QB Josh Allen dazzled. Allen earned three touchdowns on them in the first half and averaged almost nine yards per attempt. The remarkable game also resulted in Allen being the fifth rookie quarterback to win as a two-touchdown underdog since 1995.

Even if you won’t put on a helmet and run on the green alongside Eli Manning or Tom Brady, you too can defy the odds and build your dynasty! Check out Wolverine Studios’ Pro Football 22 and try a free demo today.