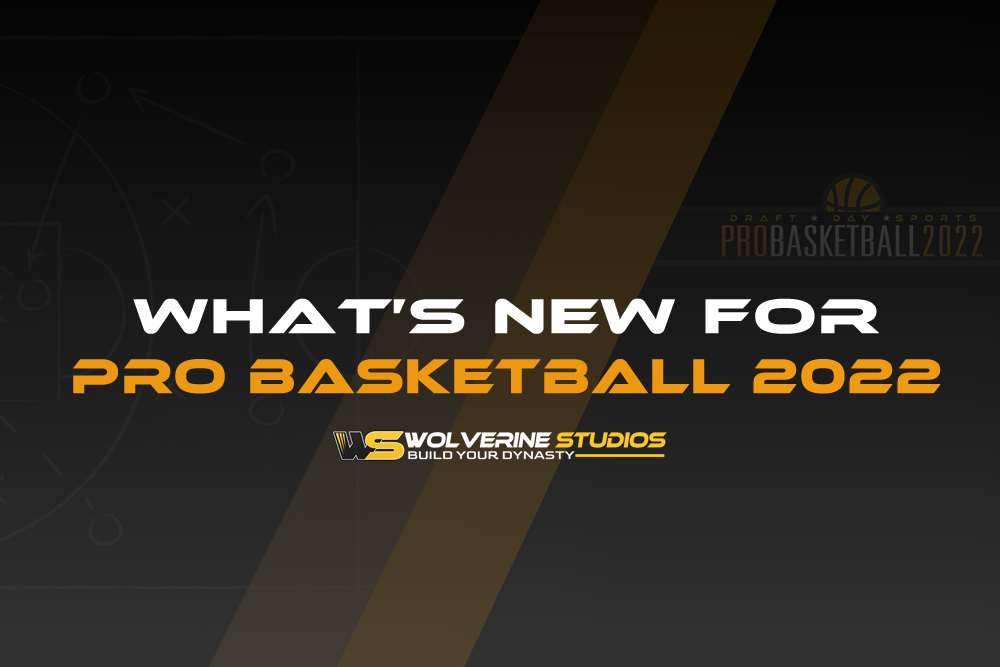 A new basketball season is upon us and we have a host of big new improvements in Draft Day Sports: Pro Basketball 22 that will make it the most exciting season yet for you!

One of the biggest new changes to the game is the brand new personality types system. We have now assigned one of 23 different personality styles to each player, coach and general manager in the game to give you an even more realistic team building experience. Each particular personality type has its own tendencies towards the game’s ratings in loyalty, motivation, consistency, greed, winning, work ethic and demands for playing time for each player to shape players in a certain relatable fashion as opposed to making them all random as in the past.

The personality types also have a defined way they interact with each other. This is going to give an exciting new learning curve to the game as well as you learn which personalities do not mesh well from both a team and organizational standpoint. This will lead you to have to make more targeted decisions in terms of signing free agents and trading for players (as well as in determining your coach). One of the strongest points of the DDS:PB series has been its team building component which requires you to find players who have a playing style that fit well with the rest of your team as opposed to simply finding the highest rated players possible. The all new personality types will enhance this further as you now have one more big piece of the puzzle to contend with in building your team.

Another huge change for the game this season comes in the aforementioned free agency department. We have totally revamped free agency in the game adding a brand new player meeting feature to the free agency screen.

You are now able to meet with a player as part of the free agency process. You have the opportunity for a short dialogue with them on relevant subjects such as if he is friendly with anyone on the roster or what he feels your chances of signing him are. Most important is the new promise system which adds a brand new wrinkle to free agency. You are able to offer one of six promises (if you choose to do so) to a free agent in order to try and win him over and put your offer over the top. Beware though, failure to live up to what you promised will have a damaging effect on the player’s feelings about your organization and will inevitably lead to the player wanting to leave and possibly causing issues for the rest of the team on the way out.

The big new changes don’t stop there though. We decided to make big time changes to the draft scouting department as well. Feedback on the prior version from our fan base definitely led to this change as the old system was not well understood and led people to feel it was not all that useful. The new system now gives you an amount of scouting points to assign to different areas for both US and International players allowing you to focus on scouting information that you find useful.

These new scouting point categories will allow you a new breakdown on draftee information as you can see by the above picture. There will be multiple “star evaluations” available from the in-game Wolverine Studios Sports Network (WSSN) as well as from scouts and team staff depending on where you spend your points and which players you choose to workout in pre-draft workouts. This new system will let you tailor a scouting plan to what you value most whether that’s just getting overall rankings for players or spending the points instead for the “deep dive” evaluations which could help unearth hidden gems and alert you to players who might not live up to the hype.

The playoffs have gotten attention in DDS:PB22 as well with the addition of a playoff MVP award in all leagues as well as adapting the new play-in tournament to 30 team leagues (or 32 team leagues if you have gone through the in game expansion draft process).

The play-in tournament models the latest changes in pro basketball which pits the 7th-10th seeds in a mini tournament at the end of the season to see who will earn the final two playoff spots in each conference. It will be an exciting new addition that will give you something to play for at the end of the season – especially if you are a general manager who needs a playoff appearance to keep his or her job and you are behind in the standings.

We could have stopped there but there are so many more new additions and tweaks and we want to talk about some of them. The best thing about these other additions are they are 100% driven by comments from our community. As always, your feedback continues to push the game to higher and higher levels. Here’s a couple of our favorites from this list.

That’s just a few of the host of other improvements and changes that are part of this year’s game. We know that if you love basketball then Draft Day Sports: Pro Basketball 2022 is the game you’ve been looking for. Nobody does it better when it comes to franchise mode in a basketball game and as you can see with a lineup of new features and improvements like this one that the best game in the business has gotten even better for 2022!