How Our Sports Simulation Games Take Realism to New Heights 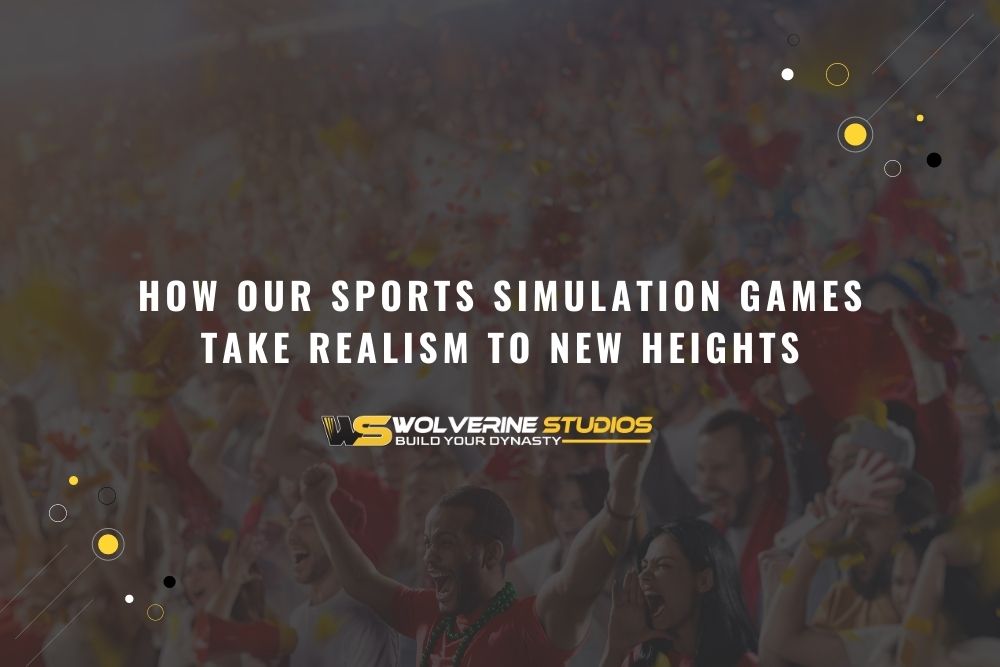 We’re not going to lie: Franchise mode gives us life. But we’ve noticed a pattern in the industry. Sports simulation games remain stagnant year after year, neglecting to make any significant changes to give users a better experience.

Sure, there are upgrades. You might notice that the graphics are a little sharper or that you have new options when it comes to microtransaction contests.

But what else is there?

In working to give you the best sports sim experience possible, this is a question that we’ve very seriously asked ourselves over time. We know there’s been some frustration in the community with unmoving franchise modes and AIs that just feel… underwhelming.

So, we set out to tackle the matter head-on. Here’s how Wolverine Studios is raising the bar.

Redefining How a Sports Simulation AI Should Really Operate

This was where we started, because the AI is the meat and potatoes. It’s the foundation, the framework. If it’s not doing its job — and if it’s not doing it really well — nothing else that comes after it can work.

First, a little lesson in technology.

Artificial intelligence, or AI, makes it possible for software and computers to nearly do anything that’s possible in reality. It’s an incredibly complex, broad section of computer science that revolves around creating machines, tools, and software that can do things that would otherwise require human intelligence.

This is why it’s an integral part of sports simulation games.

And yet, so many AIs are lacking in realism. The decision-making capabilities are seriously behind, leaving the user feeling like they’re interacting with a robot, not reality.

Furthermore, the AI behind too many sports sims is simply not savvy enough to hand over the controls to you and then show you the exact outcomes of your actions. What you’re left with is a game that feels like a game.

We want to give you a game that feels like reality.

We’re going to venture a guess and say that you’re here because you want to hone your skills as a coach or GM. Your sports simulation game won’t help you get there unless it’s pushing you just beyond your comfort zone.

Whereas the AI behind other sports sims are surprisingly easy to hack, beat, and cheat, you’re going to have to work a lot harder inside Wolverine Studios. Why? Simple. That’s how it is in real life.

Our AI is going to prove to be either your strongest opponent or your greatest ally, depending on the decisions you make for your team and franchise. It’s vital that you have the opportunity to call the shots, control what happens, and then watch the action unfold in front of you.

That is the marker of a great AI.

We know that when we’re in the sim, we want the best of the best. So, those are the standards that we hold ourselves to. We’re always making changes, improvements, and upgrades to our AI year after year. For example, in DDS: College Football 21, you’ll notice AI improvements for penalties and 4th down logic. In DDS: Pro Basketball 21, we boosted the AI logic to be even better with value picks and using them in a more sophisticated way when it comes to trades with other AI teams.

Franchise mode: a real sore spot in this community. It’s been an uphill battle for users trying to find a sports sim that lets them build their dynasty in a realistic, sophisticated manner.

They’re thinking about the longevity and success of the entire franchise as a whole.

Thus, your sports simulation game needs to give you the opportunity to build a long-lasting career. That’s why we’re a career-based simulation.

You’re working with seasoned athletes, new recruits, and either team ownership or your school's administration. You have to bring your franchise together with all of the right people, meaning not only do you have to find the most qualified players and coaches, but you have to figure out how to get them to work together harmoniously.

Each game and season, your opponents are going to be getting better, faster, stronger, more precise. Coasting isn’t an option. They’re going to be constantly presenting you with new challenges, which means you’re going to have to come up with new solutions — or your franchise will suffer.

Additionally, because our sports simulations are fully customizable, you get to build your dynasty, your way. Having the freedom to be creative and make your own rules is key in experiencing this in a lifelike and immersive environment.

We know how important the game is to you. You have the utmost respect for it, and it’s played a pivotal role in your life. We take that as seriously as you do.

Are you ready to get in the game? Let’s do it! We offer free demos so that you can get a real taste for our sports sim before taking the next step. Whether you want to hit the virtual links and work on your golf strategy, step out onto the field to watch your team score the next touchdown, or hit the basketball court to demolish your biggest rival, there’s a realistic simulation experience waiting for you with Wolverine Studios.

See you on the inside.