The Greatest Basketball Coaches of All Time 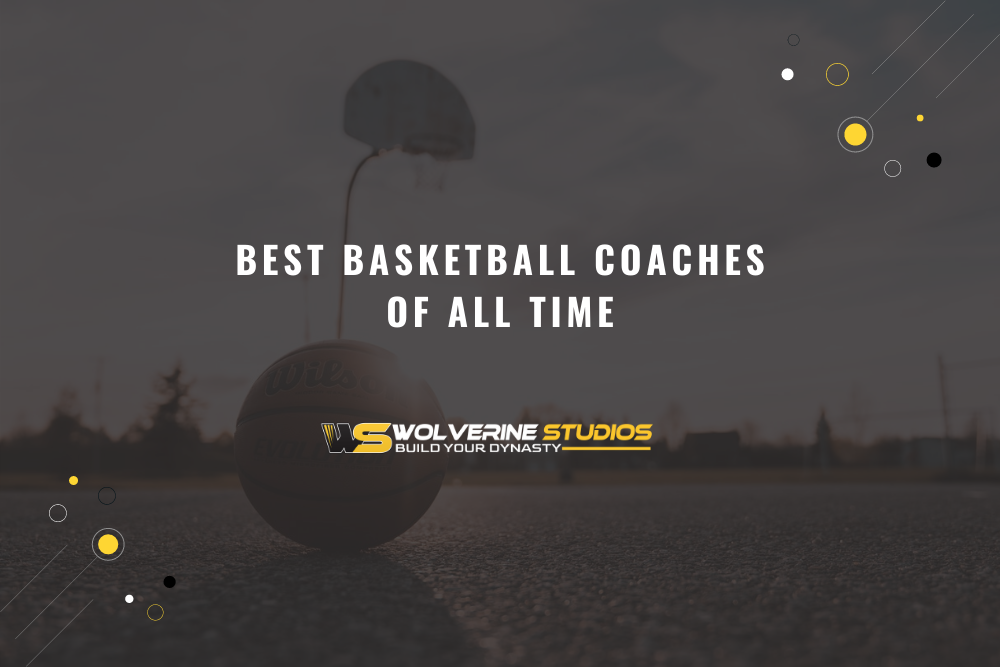 Countless basketball coaches have left their marks on their respective leagues over the decades. Coaching can be subjective as some methods may only work with specific players or lineups. Some coaches can lead one team to greatness, but eventually, fail to resonate with a new team. However, certain basketball coaches achieve legendary status because of their impressive and consistent track record of achieving results for their teams.

Need some inspiration for what an unforgettable coaching career looks like so you have something to aim for while immersed in our Draft Day Sports lineup of games? Here are nine of the greatest basketball coaches of all time:

Jackson’s career record of 1,155-485 and a career win percentage of .704 put him at #1 among qualifying peers. He also coached some of the greatest basketball players in history such as Jordan, Bryant, O’Neal, and Pippen.

Jackson was awarded Coach of the Year back in the 95-96 season and was inducted into the Hall of Fame back in 2007.

Dubbed as the Godfather of the NBA, Red Auerbach was the main man of the Boston Celtics for over three decades as a coach and an executive. His dynasty at the Celtics saw 19 playoff appearances and nine championships. Auerbach was renowned as Coach of the Year in 1965.

Four years later, in 1969, he was inducted into the Hall of Fame. Among his industry accolades, he was recognized as the NBA 25th Anniversary All-time Team Coach and chosen by the PBWAA as the “Greatest Coach in the History of the NBA” in 1980.

Brown is also the only coach to lead to the playoffs seven different times. He was awarded Coach of the Year in 2000-01 while he was with the 76ers and was inducted into the Hall of Fame a year later in 2002.

The Most Memorable WNBA Coaches

Undoubtedly one of the powerhouse names in the league, Cheryl Reeve has an impressive track record of proven success. She began coaching for her alma mater, La Salle University, and did a short stint as an assistant coach in the WNBA before taking her spot as a head coach.

She became the Minnesota Lynx’s head coach in 2009. Reeve has since led the team to four WNBA championships. She only had one losing season, which was back in 2010 during her first year as the Lynx’s coach. Since then, she’s had an overall record of 231-109 with the Minnesota Lynx and a playoff record of 40-17.

Thibault is currently the all-time winningest coach in the WNBA and was rated as the #1 best coach in WNBA’s survey at 50%. He has a track record of 350 wins and counting, having earned his first WNBA championship in 2019 with the Washington Mystics.

Thibault has almost 20 seasons in the league, with no signs of stopping. He’s already been awarded the WNBA Coach of the Year award three times. Before beginning his dynasty in the WNBA, Thibault was an assistant coach and worked as a scout in the NBA for teams like the LA Lakers and Chicago Bulls.

At Wolverine Studios, we’re always talking about being a part of a franchise, not a game. Thibault embodies that perfectly.

Chancellor is another cornerstone in the league, particularly for his 10-year dynasty with the Houston Comets. During his tenure, he led the team to four consecutive WNBA championships. He was awarded Coach of the Year three consecutive times as well. His record with the Comets was 211-111 and he coached basketball legends like Cynthia Cooper and Tina Thompson.

The Most Successful Collegiate Basketball Coaches

In his 27 years as the head coach of the UCLA Bruins, John Wooden led his team to 10 national championships, seven of which were consecutive. His career record of 664-162 included 12 Final Four appearances. His philosophies, such as the Pyramid of Success and 7 Point Creed, are followed by many, including NBA giants Bill Walton and Kareem Abdul-Jabbar. If anyone knew how to get a team to work together, it was Wooden. Next time you’re choosing your lineup in our Draft Day Sports pro or college basketball games, think of how he so perfectly built a team in harmony, where players complimented each other’s strengths and weaknesses.

Coach K is not only an icon in college basketball but is also synonymous with Duke and the school’s basketball program. In his 30+ years as Duke’s head coach, Krzyzewski built a dynasty that saw his team achieve 12 Final Four appearances and 5 national championships.

Coach K became the all-time winningest coach in Division I with 1,170 wins. He is also an Olympic medalist coach with two wins – in the 2004 and 2008 Olympics respectively – as Team USA’s head coach. He’s so beloved at Duke that a school tradition, Krzyzewskiville, was named after him.

Crowned the second-winningest coach in Division I, Knight elevated the Indiana Hoosiers’ basketball into an elite program. He led the team to 11 Big Ten regular-season championships, five Final Four appearances, and three national championships. He also did stints coaching for the Army (with a record of 102-50) and Texas Tech (with a record of 138-82).

Just like these legendary basketball coaches, you too can learn the ropes and lead your team to victory. Try our free demo at Wolverine Studios today to start building your dynasty.